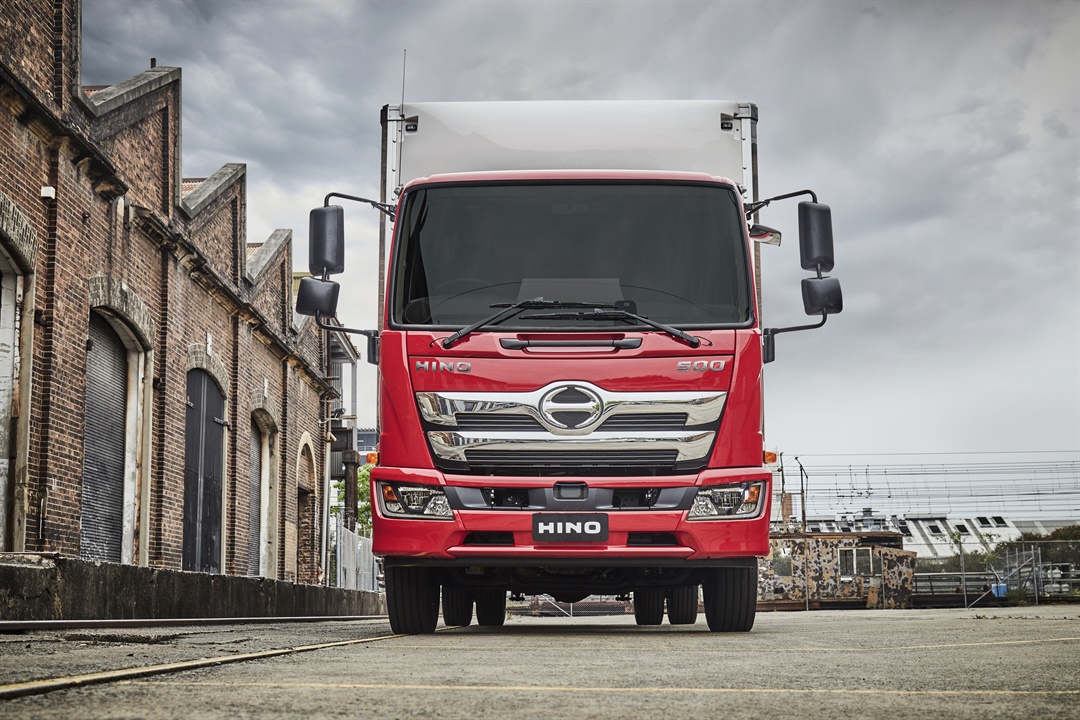 “The level of safety on this truck has never been seen before in a Japanese-built medium duty truck in Australia – this is complemented by the superior torque, increased power and reduced fuel consumption of the all-new heavy-duty Hino A05 turbo charged five litre four-cylinder diesel engine,” said Hino Australia’s Manager of Product Strategy Daniel Petrovski.

The 500 Series Standard Cab boasts the most comprehensive active safety package ever offered by a Japanese manufacturer in the Australian medium duty truck market.

The new truck also includes Adaptive Cruise Control and a Lane Departure Warning System. The Adaptive Cruise Control maintains the speed set by the driver and utilises the Safety Eye to continuously scan the road in front of the truck. If a slower vehicle is detected in front, it will reduce the engine acceleration and even engage the engine brake to adapt the truck’s speed to that of the other vehicle.

The Lane Departure Warning System is designed to alert the driver both visually on the Multi Information Display and audibly through the speakers, if the vehicle deviates from its lane without the turn indicators being triggered.

Another active safety feature which is unique among the Japanese medium duty competitors is the standard inclusion of Vehicle Stability Control (VSC), which incorporates Anti-Lock Braking System (ABS) and traction control.

This makes Hino the only Japanese manufacturer to offer Vehicle Stability Control (VSC) as standard equipment on every on-road model in its range, from the 300 Series light duty car licence through to the heavy duty 500 Series 6x4 350 horsepower FM models.

The A05 is a derivative of the larger A09 six cylinder heavy duty engine fitted to the 700 Series heavy duty models in Japan as well as the medium and heavy duty 500 Series Wide Cab models in Australia.

The 500 Series Standard Cab is the first Japanese medium duty truck range below 15 tonne GVM in Australia to be fitted with a true engine brake.

“This means that medium duty market customers can now benefit from the improved drivability and operational efficiency that the Jake brake (Jacobs Engine Brake®) can deliver,” said Mr Petrovski.

Hino is now offering an expanded choice of transmission options for the 500 Series Standard Cab models.

Manual transmissions continue to be available widely across the new range with the Hino LX06 and the new MX06 six-speed manual gearboxes fitted to FC & FD 1124 and FD 1126 models respectively, while the FE 1426 models are equipped with the new MX07 seven-speed manual gearbox which offers an additional gear and wider ratio spread than its Japanese rivals.

FD and FE customers also have the option of a Hino Automated Manual Transmission (AMT), in the MX06 six and MX07 seven speed respectively.

The all-new 500 Series Standard Cab range sets a new exhaust emissions benchmark for Japanese-built medium duty trucks in Australia, complying with Japan’s stringent post Post New Long Term (pPNLT) exhaust gas emissions standard, which is the equivalent to the Euro 6 standard, and not expected to be introduced in Australia for a number of years.

“These two proven exhaust emissions solutions have been used by Hino in the Australian market since 2011 in thousands of vehicles.”

“Our customers can choose from 54 different vehicle specifications across the 500 Series Standard Cab range of FC, FD and FE models,” continued Mr Petrovski.

The FC model now joins the FD at 11,000kg Gross Vehicle Mass (GVM), providing FC customers with a significant increase in payload, while FE models will continue to be offered with GVMs of 12,000kg and 14,000kg according to operational requirements.

The FE Crew Cab is new to the Hino range and is the only Japanese 14,000kg 4x2 Crew Cab model in the medium duty market.

Hino Australia’s 500 Series Standard Cab range continues to include the popular FC factory tipper model, which is significantly boosted by the increase in GVM to a class-leading 11,000kg.

“The striking new exterior and interior design incorporates a series of intelligent features that raise the bar for style and comfort in the medium-duty truck segment,” said Mr Petrovski.

With the aim of providing increased comfort, functionality and practicality for the Australian market, the all-new interior features an ergonomically-designed dash layout with a new smart Multimedia touch screen system, all-new instrumentation and a larger LCD Multi-Information Display.

“The interior is quite unique in the Australian truck landscape, with increased day-to-day functionality, practicality and comfort, all set in a balance of carbon, silver and earthy tones,” said Mr Petrovski.

Hino Australia’s all-new 500 Series Standard Cab has a dynamic new face with a stylish two bar grille and an enlarged Hino badge while headlamps with integrated indicators are set in the bumper.

Another first for medium duty Japanese-built trucks in Australia is the multi-function steering wheel, with its rotary switch on the left providing fingertip control of the Multi-Information Display, and its right hand rotary switch controlling the settings for the Adaptive Cruise Control.

Automated manual transmission models benefit from a new rotary gear selector on the dash that toggles between Drive, Neutral & Reverse, and gear selections can also be controlled manually via a gear selector paddle on the steering column.

Available for the first time in a Japanese truck is the ISRI NTS2 driver’s seat, which is the newest version of ISRI`s popular 6860 / 870 drivers suspension seat.

“The ISRI 6860 has been the benchmark seat in terms of driver comfort and with the new NTS2 version, the driver has the benefit of improved comfort, extra adjustability in rear seat travel, and improved safety courtesy of SRS pre-tensioner seatbelt and a seatbelt warning reminder,” said Mr Petrovski.

Commitment to the environment

“Our commitment to the environment at a local and global level goes far beyond the cleaner, greener operation of the new truck,” continued Mr Petrovski.

“Not only has Hino produced a truck that already meets future exhaust gas emissions regulations, we have also produced a truck made of materials that will allow at least 95% of the vehicle (by weight) to be recycled at the end of its life.

“At our Koga Plant, where the 500 Series Standard Cab is produced, we have made many changes to the way we operate, from the reuse and recycling of water to reduce water consumption, the reduction of energy use in cooling and heating and the use of geothermal ventilation for climate control purposes.

“These are only some of the environmental initiatives that we are implementing as part of our Hino Environmental Challenge 2050,” he concluded.